The conference was the 44th Annual Meeting of the North American Chapter of the International Group for the Psychology of Mathematics Education, held from Nov. 17 – Nov. 20.

An entire section of the academic gathering was dedicated to "Equity and Justice" in mathematics education.

In one image, a presentation slide can be seen with the term "Equipartitioning," giving an example of a practice problem involving equitably distributing sandwiches brought on a field trip. 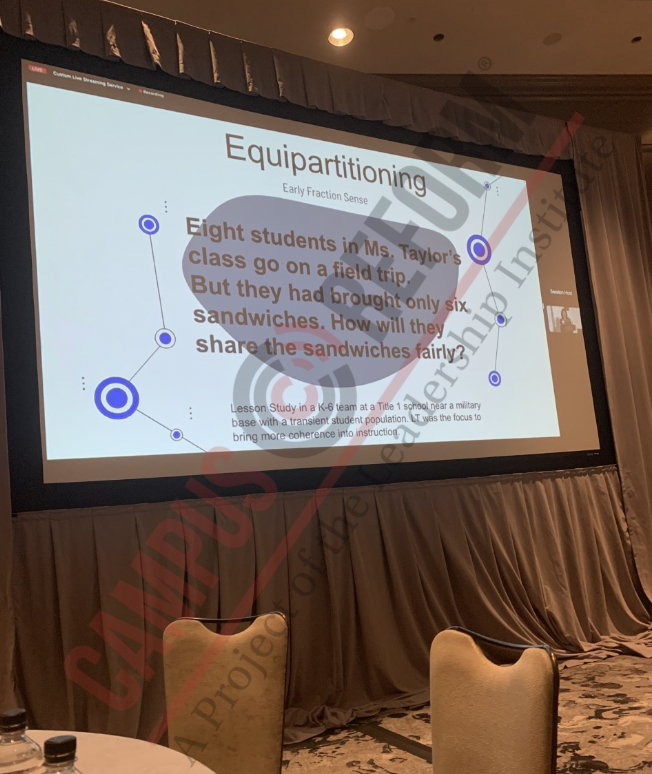 In others, it is claimed that many mathematics standards "create toxic spaces for historically marginalized students and are violent toward them," going on to quote "Queen Angela Davis." 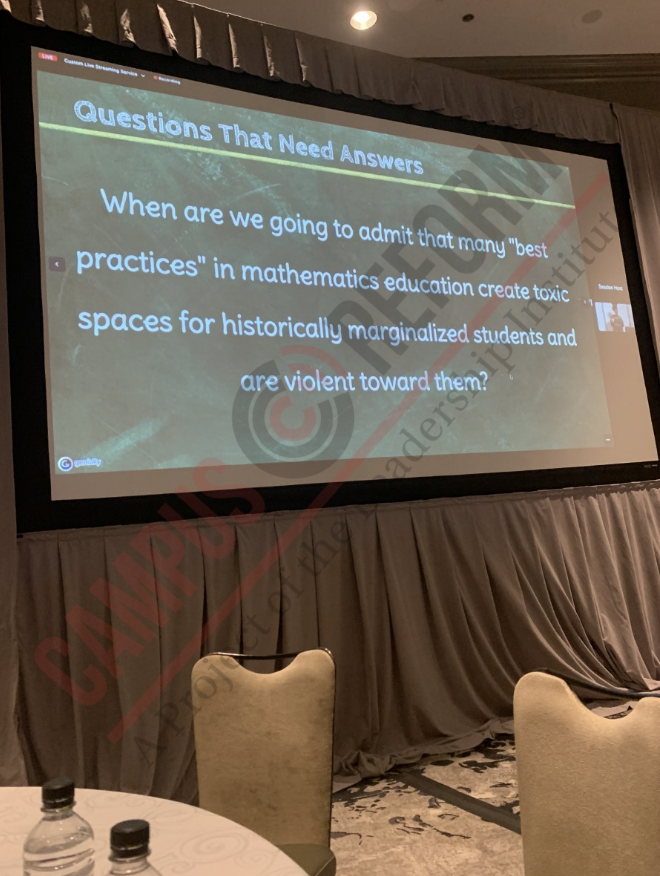 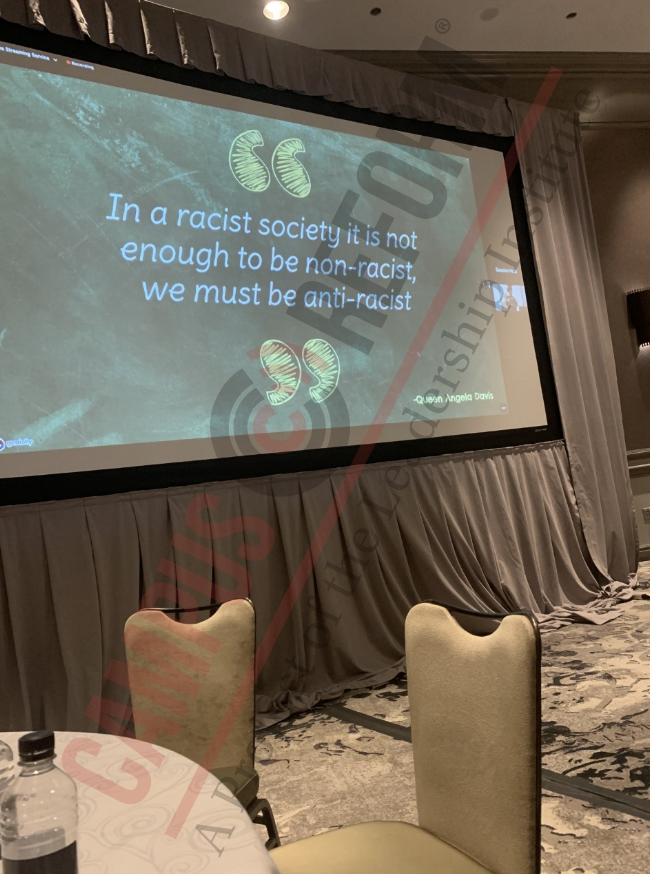 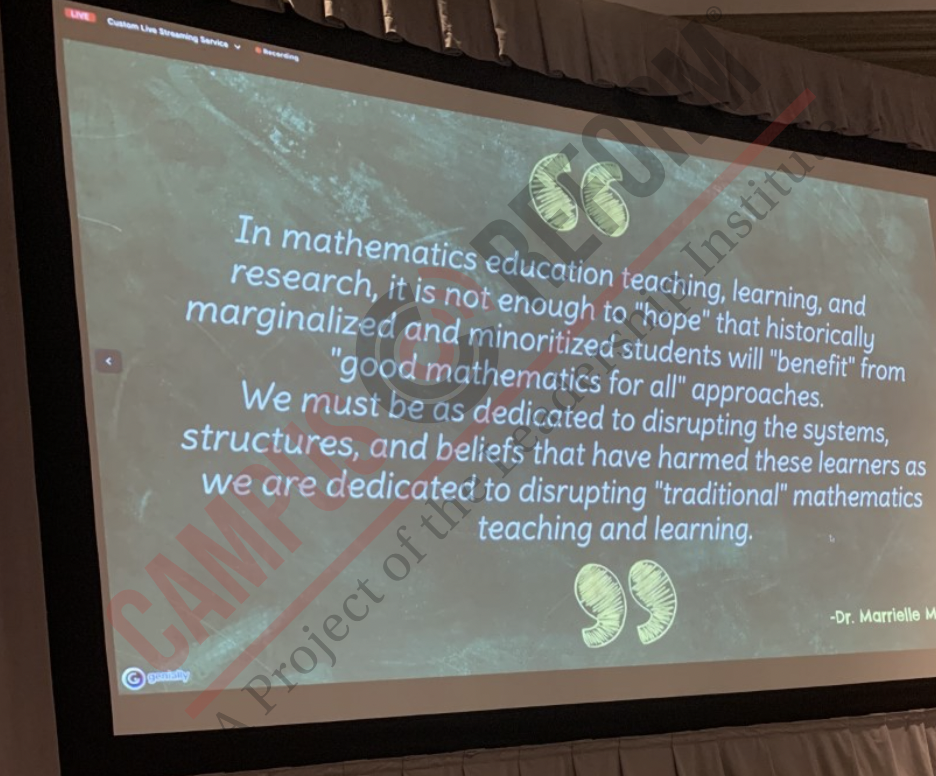 One of the speakers delivered a presentation on her paper titled “Learning Trajectories Research Needs a Hard Re-Set” in which she argues that the “reset” can “only be achieved if our community adopts a critical stance that centers equity.”

Campus Reform obtained an audio file of the speaker’s presentation.

After introducing her paper, the speaker, identified by Campus Reform as Dr. Marrielle Myers of Kennesaw State University, stated that “…anytime I speak I am always engaging as a black girl. I'm engaging as a black girl who was talkative and social and energetic and as so was labeled disruptive and bossy and denied access to gifted programs in elementary school.”

[RELATED: Booklet describes the need for universities to be “drivers of equity and inclusion in American society”]

Myers also discussed “ableism” in her presentation by posing a question to attendees, asking “How can I create tasks that are not ableist? So when you look at a lot of the supersizing work, a lot of it is that oh, because everybody has two eyes, two ears, two hands, two feet, and those are the types of things that are kind of built in.”

Myers’ paper also claims that teachers and schools are under some of the most vicious attacks in recent years.

It posits that red states such as Texas, Georgia, and Florida are continuing to “compete in a ‘race for the bottom’ as they seek to define and ban ‘divisive topics,’ create anti-woke laws, ban books, whitewash this nation’s history, and further marginalize students who identify as LGBTQIA+ by developing policies intended to destroy their safety.”

The paper continues further to victimize teachers by claiming that they are exhausted by the attacks, pandemics, and are being both sued and humiliated.

Another unidentified speaker, audio of which was also obtained by Campus Reform, defined “equity” in education in part as "promoting critical social justice perspectives."

The convention was held at the Loews Vanderbilt Hotel in Nashville and was sponsored by multiple departments of Middle Tennessee State University. These include the College of Basic and Applied Sciences, the Department of Mathematical Sciences, the College of Education, and the Mathematics and Science Education Doctoral Program.

Campus Reform contacted every university and individual mentioned. This article will be updated accordingly.

William Biagini is a student at Florida State University studying history. In addition to writing for Campus Reform, William also writes for The College Fix. In his spare time, he enjoys performing music and rock climbing.

What you stand for is what defines you

Conservative students on college campuses are marginalized, threatened, and silenced by threatening students who oppose their views, or radicalized liberal professors or administrators. Campus Reform—and readers like you—are pushing back. Progressives would rather threaten you with violence, silence your conservative views, or call for you to be "canceled" from our society if you oppose them. They say your views are dangerous, hateful, fearful, or racist.

They have it all wrong. What we stand for defines us—it always has.

We can no longer remain silent. It is time for conservatives young and old to unite as a single voice to boldly proclaim what we stand for and oppose the mob.

Will you join with us, select the principles you stand for, and sign your name below?

I stand for the preservation of free speech all across our country—where I'm allowed to express my beliefs without fear of condemnation if my opinion differs from yours.
I stand for protections for conservative students who are illegally being threatened or silenced on college campuses all across our country.
I stand for the federal funding to be pulled from colleges and universities when they silence conservative views or students.

Previous Katy ISD sets its sights on STAAR changes as legislative priority – Houston Chronicle
Next Caught COVID on the Job? Your Employer No Longer Has to Pay … – KQED

You can change your city from here. We serve personalized stories based on the selected …