by Asra Q. Nomani
On May 31, the public relations team at Fairfax County Public Schools scored a big “hit,” as it’s called in PR, getting the stories of four hand-selected students from Thomas Jefferson High School for Science and Technology featured in a Washington Post article by education reporter Hannah Natanson, headlined: “Hear from four TJ freshmen admitted under controversial circumstances.”
In the article, Natanson disparaged a “a group of disgruntled parents” that filed a lawsuit against new race-based admissions changes to the school, even though a federal judge, Claude Hilton, ruled earlier this year that the changes are illegal, “patently unconstitutional” and anti-Asian. That would be like calling the Brown family in Brown v. Board of Education “disgruntled.”
Weaponizing innocent students for its PR, the school district used the article to try to vindicate the school board’s failed policies with America’s No. 1 high school. School board chair Stella Pekarsky shared the article on Facebook with the hashtag: #studentvoices.
The next week, school board members posted photos and video from TJ’s Class of 2022 graduation with vice chair Rachna Sizemore Heizer posting a breathless message about student “pride in your TJ family and community.”
‘Hi Math 4 Students’
The teachers said that the average score for their final exam for Math 4 — equivalent to trigonometry — was “in the low 70s with a substantial minority scoring below 50%,” calling the results “the lowest scores we’ve ever seen,” even amid a “lowering of standards” at the school for the course. (It isn’t clear yet the identities of the teachers.)
The teachers wrote:
These scores are deeply disappointing, and are the lowest scores we’ve ever seen as Math 4 teachers on a Final Exam.
The math teachers noted that the final exam was “substantially easier” than final exams given to previous classes. The teachers said the students had “unprecedented supports provided to you this semester, including extra practice quizzes, bonus quizzes, practice worksheets, and a practice final exam, all things that were not given to previous students.”
The teachers continued:
We expected to see scores rise, not drop, with our lowering of standards. 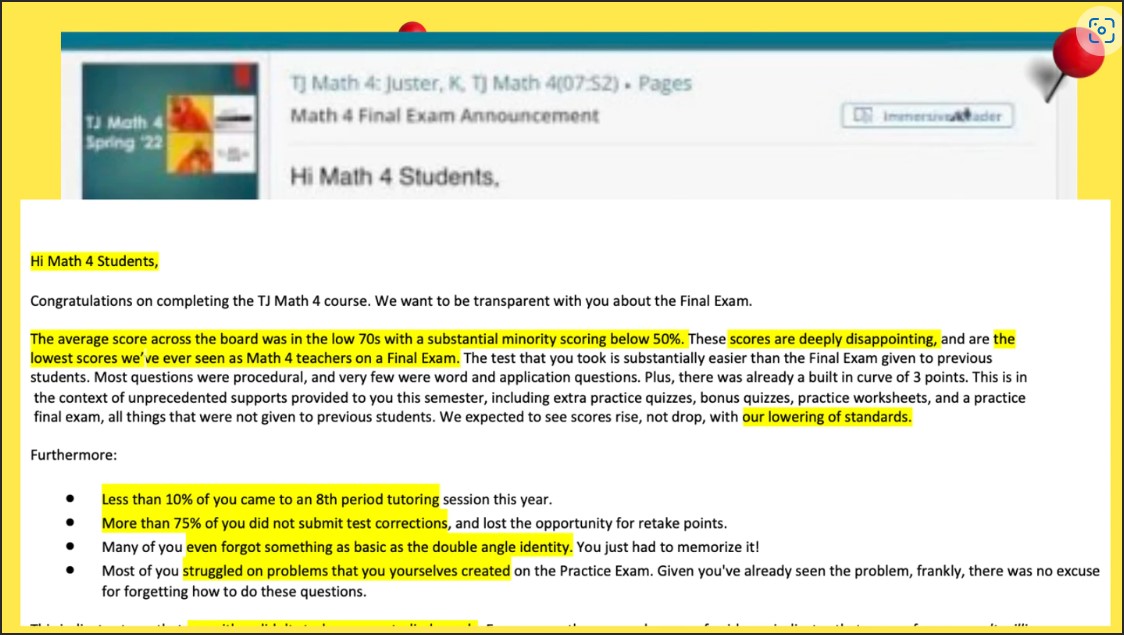 The juxtaposition of the school district’s PR hype with this email reveals once again how school board officials, educrats and the school principal are more concerned with face-saving PR and activism than actual excellence in education. While the tone of the email — harsh to some parents, fair to others — puts the onus for the failing grades on the students, some of them as young as 14 or 15, the bottom line for the failures at TJ rests with the school board, school district officials and the school principal, Ann Bonitatibus, who many parents say has undermined academic advancement since her start at TJ in the summer of 2017, literally bringing a program called “Challenge Success” to the school in 2018.
Why ‘lowering of standards’ matters
This is the translation of courses at TJ:
As a solution, the teachers said:
We will curve the exam by 10 percentage points (which means 7.5 points, out of 75), but you should know that this curve is artificial and not deserved. 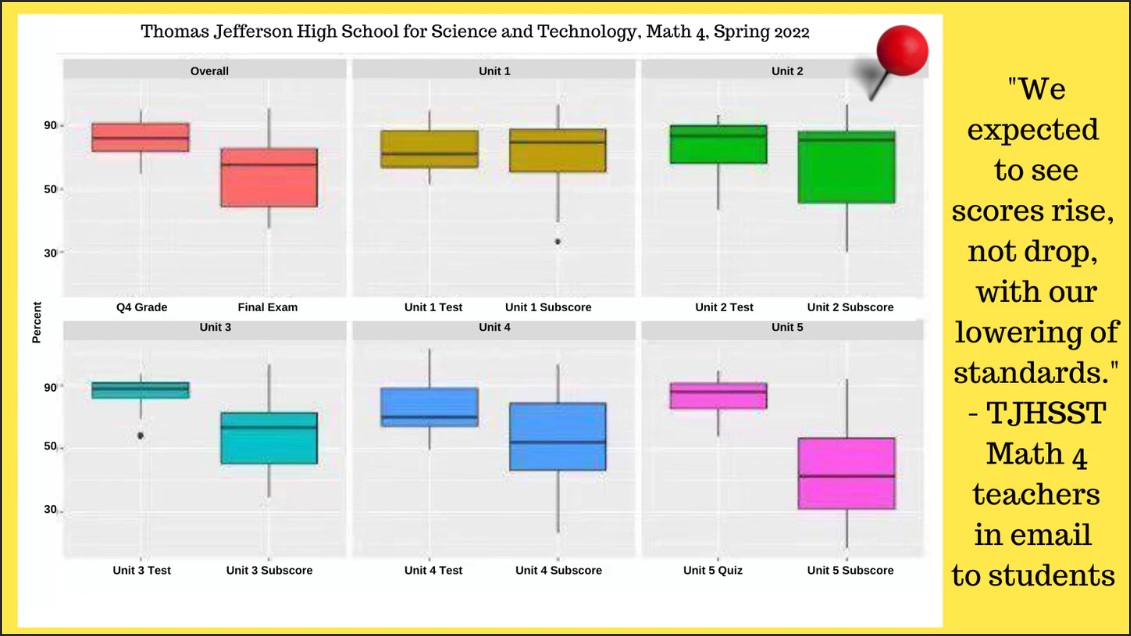 The teachers admonished the students for not attending after-class tutoring with teachers, held during something called “8th period,” and scolding them also for not submitting test corrections.
They wrote:
This indicates to us that you either didn’t study, or you studied poorly. Even worse, the preponderance of evidence indicates that many of you weren’t willing to change how you learned or studied since the start of Math 4.
Why does an email to a group of math students at one school in Northern Virginia matter?
The “lowering of standards” that the math teachers acknowledge is happening across the country with a national war on merit, advanced academics and fair competition, as school districts eliminate failing grades, advanced placement courses, merit admissions and even valedictorian honors, in the misguided name of “equity.”

The “lowering of standards” at TJ matters. The school has graduated future inventors, researchers, entrepreneurs and innovators since its launch in 1985, and the “lowering of standards” reveals a national security threat for the U.S., as it attempts to compete with nations like China in science and technology. Advanced math is a critical element for success in careers from computer science to astrophysics and aeronautical engineering.
The “lowering of standards” reflects the failure of the school board and principal to help some of the school district’s brightest — and most academically motivated — students. And it underscores the point that “disgruntled parents” (including me) have been arguing for two years now to deaf ears from the principal, school board and school district officials: education, not activism, should be the priority of school officials.
Punctuating with “❤️”
One former TJ parent said: “Looks like the teachers have had it. ‘Our lowering of standards.’ ‘Either you didn’t study, or you studied poorly.’ ‘This curve is artificial and not well deserved.’ ‘This time, it’s on you.’ WOW.”
At the end of the day, our obligation as a society is to support and encourage youth to be the best they can be. We can scrutinize the tone with which the teachers lectured the students — on the eve of summer vacation — and we can hyper-analyze the way students manage their time.
But ultimately this is a failure of leadership — from the school board to the school principal and superintendent who love to brag about the success of TJ students but do little to actually support these remarkable students who accomplish despite these bureaucrats.
The lesson from this email is that educrats need to start spending their time less on PR and more on actual educational supports that help students and teachers succeed.
And with the “❤️,” with which the Math 4 teachers signed off, they remind us that the best gift we can give our children is accountability but also unconditional love — so no matter what the email received or the grades earned, they know they are adored, cherished and precious. That’s simple math.

Asra Nomani is a senior contributor at The Federalist and a senior fellow at the Independent Women’s Network. This column has been republished with permission from Asra Investigates.
Shake up the status quo!
Your contributions will be used to pay for faster download speeds and grow readership. Make a one-time donation by credit card or contribute a small sum monthly.

Enter your email address to receive immediate notifications of new posts by email.


Check out the Bacon’s Rebellion News Feed, linking to raw and unexpurgated news and commentary from Virginia blogs, governments, trade associations, and advocacy groups.
We welcome a broad spectrum of views. If you would like to submit an op-ed for publication in Bacon’s Rebellion, contact editor/publisher Jim Bacon at jabacon[at]baconsrebellion.com (substituting “@” for “at”).

Previous Spatial thinking as the missing piece in mathematics curricula | npj Science of Learning – Nature.com
Next COMMENTARY: California must invest in science and math instruction in the state budget now – EdSource